The interleukin-3 receptor α subunit, CD123, is expressed in many hematologic malignancies including acute myeloid leukemia (AML) and blastic plasmacytoid dendritic cell neoplasm (BPDCN). Tagraxofusp (SL-401) is a CD123-targeted therapy consisting of interleukin-3 fused to a truncated diphtheria toxin payload. Factors influencing response to tagraxofusp other than CD123 expression are largely unknown. We interrogated tagraxofusp resistance in patients and experimental models and found that it was not associated with CD123 loss. Rather, resistant AML and BPDCN cells frequently acquired deficiencies in the diphthamide synthesis pathway, impairing tagraxofusp’s ability to ADP-ribosylate cellular targets. Expression of DPH1, encoding a diphthamide pathway enzyme, was reduced by DNA CpG methylation in resistant cells. Treatment with the DNA methyltransferase inhibitor azacitidine restored DPH1 expression and tagraxofusp sensitivity. We also developed a drug-dependent ADP-ribosylation assay in primary cells that correlated with tagraxofusp activity and may represent an additional novel biomarker. As predicted by these results and our observation that resistance also increased mitochondrial apoptotic priming, we found that the combination of tagraxofusp and azacitidine was effective in patient-derived xenografts treated in vivo. These data have important implications for clinical use of tagraxofusp and led to a phase 1 study combining tagraxofusp and azacitidine in myeloid malignancies.

CD123 expression is maintained during and after tagraxofusp treatment in patients. 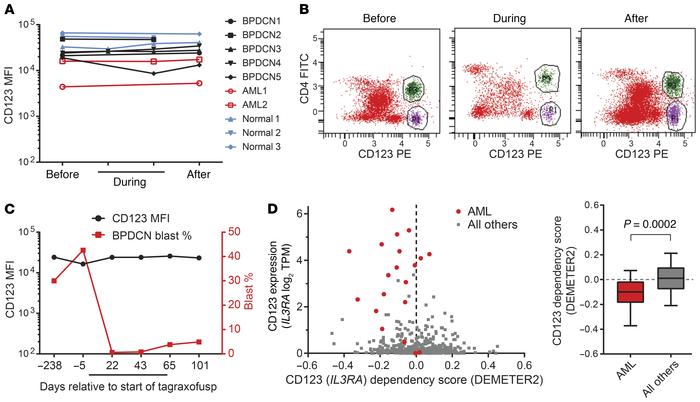 () The mean fluorescence intensity (MFI) of CD123 staining as measured by flow cytometry in bone marrow aspirates is plotted before, during, and after tagraxofusp treatment and annotated as malignant blasts of AML or BPDCN, or as putative non-blast CD123-positive cells. () An illustrative example of bone marrow aspirate flow cytometry from a patient with BPDCN before, during, and after tagraxofusp showing the malignant CD4+CD123+ BPDCN blasts (green) and the CD4–CD123+ non-blast cells (purple). () CD123 MFI and relative BPDCN blast percentage in bone marrow are plotted from another illustrative patient before, during (black bar), and after tagraxofusp treatment, showing maintenance of CD123 at a stable level despite significant changes in the relative percentage of blasts. These examples are representative of all cases in , wherein the CD123 level was unchanged regardless of whether there was a significant change in disease burden. () CD123 () dependency score ( axis) is plotted against CD123 () RNA expression level in transcripts per million (TPM) for cell lines in Project Achilles. AML cell lines are labeled red ( = 20) and others are gray ( = 481). Negative dependency scores (calculated using DEMETER2) signify that cell line has a relative growth disadvantage when CD123/ is depleted in a genome-wide pooled shRNA assay. value calculated using 2-tailed test.