Catecholamines released by sympathetic nerves can activate adrenergic receptors present on nearly every cell type, including myeloid-derived suppressor cells (MDSCs). Using in vitro systems, murine tumor models in wild-type and genetically modified (β2-AR–/–) mice, and adoptive transfer approaches, we found that the degree of β2-AR signaling significantly influences MDSC frequency and survival in tumors and other tissues. It also modulates their expression of immunosuppressive molecules such as arginase-I and PD-L1 and alters their ability to suppress the proliferation of T cells. The regulatory functions of β2-AR signaling in MDSCs were also found to be dependent upon STAT3 phosphorylation. Moreover, we observed that the β2-AR–mediated increase in MDSC survival is dependent upon Fas-FasL interactions, and this is consistent with gene expression analyses, which reveal a greater expression of apoptosis-related genes in β2-AR–/– MDSCs. Our data reveal the potential of β2-AR signaling to increase the generation of MDSCs from both murine and human peripheral blood cells and that the immunosuppressive function of MDSCs can be mitigated by treatment with β-AR antagonists, or enhanced by β-AR agonists. This strongly supports the possibility that reducing stress-induced activation of β2-ARs could help to overcome immune suppression and enhance the efficacy of immunotherapy and other cancer therapies. 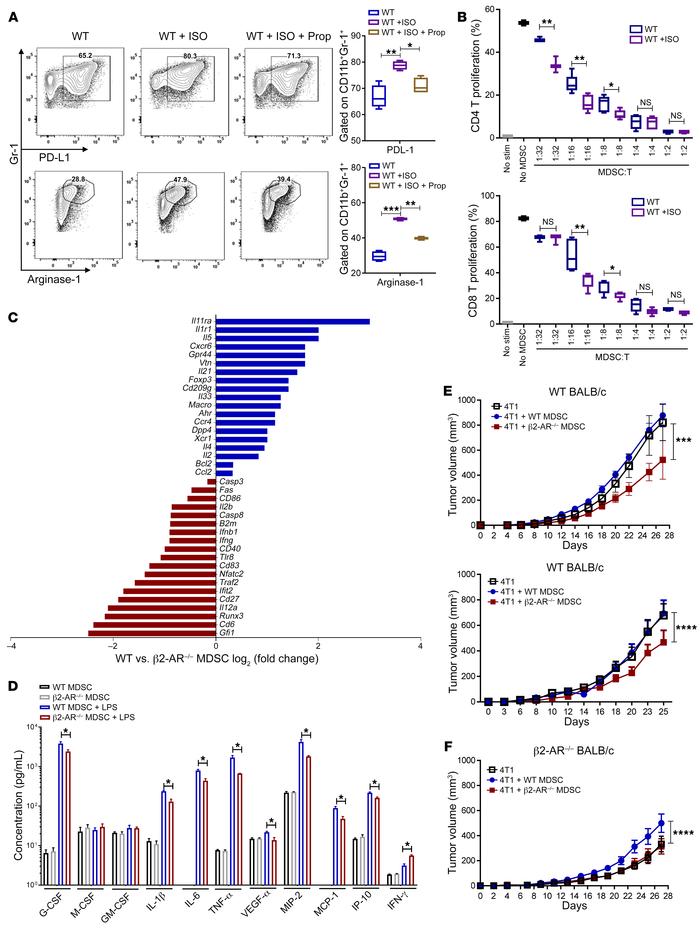 () Representative flow cytometry data of the expression of arginase I and PDL-1 plus the percentage of arginase I and PD-L1 in MDSCs derived from bone marrow in the presence of IL-6 and GM-CSF (WT), IL-6, GM-CSF and ISO (WT + ISO) or IL-6, GM-CSF, and ISO and Prop (WT + ISO + Prop) for 6 days. () T cells cocultured with WT or WT + ISO MDSCs in various ratios ( = 3). () Nanostring nCounter microarray analysis of WT or β2-AR–/– MDSCs sorted by flow cytometry from 4T1 tumors of WT or β2-AR–/– mice 25 days after tumor injection (WT or β2-AR–/– MDSCs were pooled from 5 mice per group). () WT and β2-AR–/– MDSCs were sorted from bone marrow of 4T1 tumor–bearing mice, cultured with LPS for 24 hours, and cytokines levels were analyzed in culture media using multiplex ( = 3). () Tumor growth kinetics in WT mice orthotopically injected with 4T1 cells (black square) or coinjected with 4T1 cells and WT MDSCs (blue circle) or 4T1 cells and β2-AR–/– MDSCs (red square). MDSCs were sorted from the BM of tumor-bearing mice using an MDSC isolation kit. () Tumor growth kinetics in WT or β2-AR–/– mice receiving i.v. transfer (3 × 106 on days 3 and 6 after 4T1 injection) of MDSCs sorted the BM of tumor-bearing WT or β2-AR–/– mice. Two-way ANOVA was used to analyze statistical significance among tumor growth in different groups. These data are presented as mean ± SEM. Other data are presented as median ± minimum to maximum. One-way ANOVA was used to analyze statistical significance among 3 groups, and the Student’s test was used to analyze statistical significance between 2 groups. In all panels, * < 0.05, ** < 0.01, *** < 0.001, and **** < 0.0001. A value less than 0.05 was considered significant.